»In 2017, Matrix Croatica (Croatian: Matica hrvatska) celebrated the 175th anniversary of its founding in numerous ways, both through celebration and work. That year, many texts were written on the oldest national cultural institution, attempting to show that Matrix Croatica saw culture as more than just books, periodicals, concerts, or art exhibitions—it saw culture as a relationship towards people and their creativity. It treated its members, authors, and collaborators with the utmost respect, respecting all of the cultural gifts through which they enriched the lives of others in Matrix Croatica’s publishings. Matrix sought to be a place where a synergy of various talents would be realised, a place to strive for knowledge and beauty. Matrix spread the belief that culture protects human fragility; it entreated us not to spread darkness around ourselves, but rather for each of us to light our own candle, however small, to help Croatia live and continue to live better.

At the time the text currently before readers was written, its authors served as the president (Stjepan Damjanović) and general secretary (Zorislav Lukić) of Matrix Croatica, and as such, it was their duty to ensure this celebratory year was used to spread knowledge of Matrix Croatica in numerous places and ways. In conversation with Matrix’s general secretary, our compatriots and friends from Canada and the United States expressed their desire for a comprehensive text to present Matrix Croatica to both Croatian emigrants and their American friends alike, to be published in the Journal of Croatian Studies ‒ this text was, of course, to be in the English language. There was little time in which to both write and translate the text, so the two of us decided to write the text together. We considered it best to include abundant quotations from Matrix’s documents and scientific literature on Matrix in order to paint the most objective picture possible of Matrix’s 175 years of existence. When we completed the text, we entrusted the translation to Jeremy White. The prestigious Journal of Croatian Studies in New York published our text in 2018 in its fiftieth issue, for which we are especially thankful to journal editors Dr. Vladimir Bubrin and Dr. Vinko Grubišić. When the text was published, numerous friends of Matrix Croatica encouraged us to publish the text on the Matrix Croatica website, thus enabling those who do not know Croatian to learn the most important facts about Matrix’s long, fruitful history. We accepted this proposal gladly. We have not altered the text for this edition, and we hereby offer it to anyone interested; we hope it will be of use to as many people as possible« (The Authors). 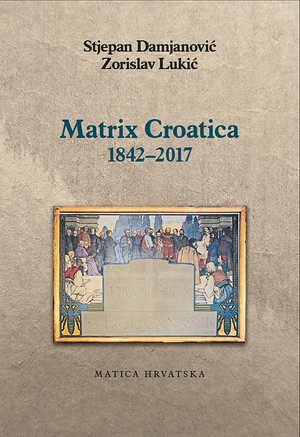